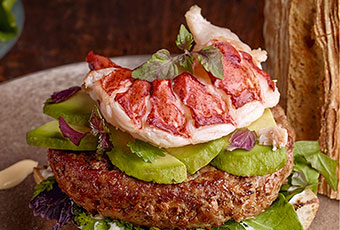 Nurembergers come from Nuremberg and Wieners from Vienna, but hamburgers come from Großostheim, near Aschaffenburg in Lower Franconia, the home of Salomon Hitburger GmbH and Salomon FoodWorld GmbH.

Salomon Hitburger is a pioneer for finger food. As a specialist in hamburger brands, the meat processor and specialist in products for eating out, supplies, for example, Burger King with its famous Whopper Patty via its sales company Salomon FoodWorld. McDonald’s, Nordsee and Kochlöffel are also among the fast food suppliers in Germany who purchase products from Salomon FoodWorld. Full service for system gastronomy at Maredo and Mövenpick is just as much a part of the range of services as hotel services for the Accor Group. And if you order a snack at Cafe extrablatt or Cafe del Sol, it will be a Salomon FoodWorld product. One million hamburgers leave Großostheim every day, either directly to the customer or to the company’s gigantic logistics center in Bocholt. 90 tons of meat, delivered between 3.00 and 6.00 am, are made into hamburgers every day.

There are many reasons for this success, and one of them is the close contact with customers and consumers, for whom system solutions are developed and continuously improved in quality. In order to bundle sales and marketing know-how, a separate sales company, Salomon FoodWorld, was founded in 2006. It is responsible for a number of strong brands: Salomon, Ranchmaster, Lutz and many more. Together with other suppliers from the food sector, they are part of the Dutch Vion Food Group.

Since July 2011, the GUS-OS Suite has not only been used to control production at Salomon Hitburger, but also the complex sales process at Salomon FoodWorld. For this purpose, no fewer than eight companies had to be mapped in the GUS-OS Suite. Their products are booked and resold in the intercompany business as consignment goods. Throughout Europe, Salomon FoodWorld’s customers include well-known brands of system gastronomy such as Kentucky Fried Chicken, Pizza Hut, Subway, Autogrill, Wimpy, P6O Ferries, or the Radisson and Hilton hotel chains.

The company’s offer is by no means limited to snacks and meals. The entire product presentation is provided by services from Großostheim, which requires an intensive dialog between sales and customers that is now supported end-to-end with the GUS-OS Suite.

Interfaces to the logistics center in Bocholt, EDIFACT data communication with customers, and Customer Relationship Management provide Salomon with an unprecedented degree of integration. Better process quality has been achieved, for example, by eliminating isolated solutions, which also eliminates the need for multiple data entry.

In order to be able to identify the complexity of the business processes and integration interfaces precisely, the GUS Group and Salomon carried out a detailed analysis of the work steps in a preliminary project. The exact scope was thereby determined at an early stage as a prerequisite for a meticulous project implementation.

This also applies to the GUS-OS Suite support for production processes at Salomon Hitburger. One focus of the project was on further improvement of quality and safety in production. Thus, the previous paper-based feedback at the machines was replaced by scanning processes. This means that GUS-OS has an up-to-date overview of inventories and production progress at all times. Using GUS-OS Balance, raw materials can also be mixed directly from the system.

This leads to a significant improvement in the quality of batch tracing. Previously, after mixing the raw materials, there used to be a break in the batch history, which only resumed once the finished article was available. The history of batch origins can now be traced in detail from the order to the delivery of the raw materials, from storage to provision, and from production to the delivery of the finished product. It goes without saying that Salomon is certified according to the International Food Standard (IFS), and Salomon Hitburger has also acquired the demanding Burger King certificate. Readiness for improvement is one of the quality maxims to which Salomon is committed. For the GUS team, this was also a motivation in a challenging project.